I’m currently single and living alone, having decided that I’m not interested in having a family anytime in the foreseeable future. I work at Radford College, running the Archives two days a week and I spend the other three weekdays writing my novels. I’ve commercially published 13 of them so far and more are on the way. Other than that I enjoy walking and cycling, and going to the movies. I collect soundtracks and design and sew custom toys (I am a “Taylor”, after all!)

I was happy at Radford, so that’s a tough question! If I have to pick a moment that really changed me, it would be when I went on the Outward Bound camp. I was not an athletic kid, and I started out trailing along at the back of the group, wanting to die and trying to think of anything that could get me out of there. But by the end of that camp I was striding along at the front, because by then I had realised that I was much stronger than I had ever imagined. My mother said that when I came home afterward she was shocked by how much I had changed. And now I actually enjoy walking long distances with a heavy pack on – crazy!

I was never much of a one for academics, but there was one class I both aced and absolutely loved and that was Writer’s Workshop with a teacher called Mrs Pacey. I took that class while I was first trying to get published – and unwittingly suffering from caffeine poisoning into the bargain – so needless to say it was a tough time for me. But Mrs Pacey really stuck by me and gave me the encouragement I needed, something I haven’t forgotten. My only regret was that she left the school before I got my wish, so I was unable to invite her to my very first launch party. I hope she reads this, wherever she is now!

I spent most of my teen years wanting to be an author and that never changed. I eventually succeeded at that but afterwards realised that I was going to have to find a real job, since writing doesn’t pay the bills. It took me years to work out my other calling, which turned out to be archiving/librarianship. So I went back to University and majored in both, before finally deciding I wanted to be an archivist – just when Radford advertised for a new one. Lucky me!

Nothing ever goes completely to plan! Becoming published worked out for me quite well but I set out with the intention of publishing Young Adult (YA) fantasy about animals and ultimately ended up publishing high fantasy for adults – a genre I don’t even particularly like, if you can believe that! I never really got into the hard-core Tolkien-style fantasy and despised Lord of the Rings. Nor was I able to get interested in any of the other big names in fantasy for adults. I tried my hand at the genre anyway, just for fun and found out I was pretty good at it (or so readers tell me). In fact I found people liked it better than the “serious” projects I was trying to write. So I shrugged and had a go at publishing it – for young adults. The publishers said otherwise and marketed it for adults instead and before I knew it I’d joined such people as Robin Hobb and my personal hero George R R Martin. And I’m sure as sunrise not going to complain about that!

As for my other career, I initially started my Master’s degree intending to become a librarian and didn’t even know that “records management” was just a fancy term for archiving. I only majored in that on the advice of one of my tutors, who said a double major would be very useful. Then I took a mandatory unit in which I had to do a practical project in an actual workplace and someone suggested I do it at the Lu Rees Archives of Children’s Literature, whose managers already knew me thanks to my work in publishing.

I found the experience at Lu Rees so incredibly inspiring and enjoyed the work so much, that I decided I now wanted to be an archivist. So I applied at Radford and now here I am - and very happy about it too. I consider myself to be a very lucky person.

I wish I’d known I was allergic to caffeine! I spent at least two years drinking coffee and feeling strung out and nauseous without knowing why. When I finally went to see a doctor, they suggested it might be hepatitis! But as soon as I gave up the coffee – no more anxiety or vomiting. It made my last year here a lot more unpleasant than it needed to be.

I would say I also wish I’d known that I was one day going to become a published author the way I so desperately wanted to… but no. If I’d known, I wouldn’t have tried as hard as I did.

In the end, I don’t really regret any of the mistakes I made in school. Without them I wouldn’t be the person I am today. I don’t even really regret the fact that I was too lazy to sign up for those driving lessons and to this day I am still unable to drive anything other than a bicycle. I couldn’t afford a car anyway, ha-ha-ha.

This has been said before, but it bears repeating: high school is not your whole life. It probably feels like it, but it’s not. I got a D in Maths, and guess what? That has had zero impact on my life since. I got detention for hiding in the library instead of going to Chapel, and guess what? No-one cares.

But I was lucky to have gone to such a great school as Radford and so are you. This is a school that takes care of its people – students and staff alike. You matter to them, whether you’re a Prefect or a troublemaker and I think it’s important to take a moment to appreciate that and make the best of what’s been offered to you.

Ultimately, life experiences are far more important than formal education. The friends – and enemies! – you make here will shape you as a person and teach you more about yourself than any three textbooks I could name. In the end, that’s what’s really important.

I attended the San Diego ComicCon, where I sat on a panel with George R R Martin himself! Brandon Sanderson and Patrick Rothfuss were also on the panel too (both are very well-respected bestselling authors). It was my finest hour – part of the panel was filmed and put on YouTube, in fact (search for “2011 ComicCon Epic Fantasy Panel”) 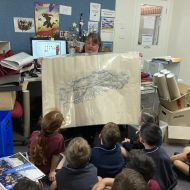 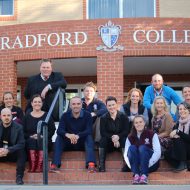 H4H #17: Collegians on staff at Radford 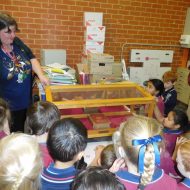 Kindy visits the Radford Archives – in search of precious memories and found many collegians! 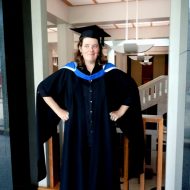