Life after Radford with John Pendall (Teacher between 1985-1991)

John's educational philosophy is that education involves the “total individual”, encompassing the physical, mental, spiritual and social aspects which are so important to the overall development of each individual student for his / her later life. After 23 years, John is preparing to retire from St Rita’s College in Queensland.

Before John joined Radford in 1985 as Sportsmaster and teacher of Physical Education (PE) he lived in Papua New Guinea and taught at Port Moresby International High School. He shares that the experience gained from teaching at the High School was not only on a teaching level, but also on a cultural and social level and helped him broaden his knowledge and skills as a teacher.

In 1984, John wrote as part of his application to Radford that his educational philosophy is that education involves the “total individual”, encompassing the physical, mental, spiritual and social aspects which are so important to the overall development of each individual student for his / her later life. PE  gives the individual an opportunity to express themselves outside the boundaries of the classroom, and therefore assist in major development of the physical and social areas.

John had great influence in both the PE Curriculum and in the co-curricular sporting programs. He worked tirelessly to upgrade the PE at the College and he instituted a sporting exchange with Bankstown Grammar. He also taught in the Mathematics Department.

John took leave from Radford College in April 1991 to pursue his interest in diving. He later became one of the Assistant Coaches to the Olympic Diving Team based in Brisbane. This move proved very successful for John and as a result he decided to part ways with Radford.

John’s distinctive style was easily recognisable at the many sporting carnivals he organised, and staff have vivid memories of the hundreds of bus trips he arranged for students to travel to sporting venues when the College lacked its own facilities. John’s special interests were with Basketball and Diving and his expertise gave the College much success in these areas.

When I spoke to John, he had just finished a round of golf, a hobby he has enjoyed participating in for many years along with brewing his own beers for friends and family. He looks forward to continuing more of these activities when he starts his seven-day weekend.

John shared that when he first commenced at Radford there was no TB Millar Hall or undercover areas to teach PE in, the Canberra winters certainly made this challenging as the students were less than motivated to participate in PE.

One of John’s fondest memories of his time at Radford was Year 9 camp, adding that the student’s resilience and teamwork was very inspiring. On one camp the students were in charge of map direction and ultimately ended up going through a swamp, John recalled how students rallied around one student who had injured their ankle and carried her bag to help her.

John was inspired by Jock Mackinnon, Radford’s Principal between 1984 and 1988. John shared that he appreciated how Jock considered things and had a very calm demeanor – his attention to Radford sport was certainly appreciated, with John adding that  Jock would rotate his weekends to ensure he watched every student play and that students were representing the College to a very high standard when playing against other teams. 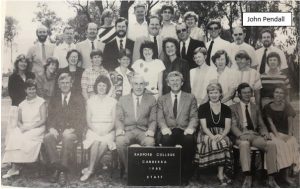 Boyd Gibson has been teaching at Radford for 36 years and first met John round about mid-January, 1985 in the Radford College Library, where they were having the new teacher’s orientation day.

The smaller size of the staff meant that it was very easy to build a comradery across all Departments.

Boyd added that John quickly stood out as being incredibly well organised, a highly competent teacher who was a stickler for student discipline and seemed to possess a very keen sense of humour “I’m pretty sure that he was always laughing with me and not at me, and we certainly shared our fair share of jokes at each other’s expense”, Boyd said.

Boyd and John took it in turns to write weekly assessable math tests (10 in each of the three terms), and all too often they would include each other’s names as part of the word-type problems – much to the considerable amusement of their students. Boyd shared that students would eagerly enquire about what he was going to say about Mr Pendall in the upcoming test on the Friday or ask questions like why did Mr Pendall waste all that money buying 22 widgets @ $55.59?

Boyd and John’s professional relationship rapidly segued to a social one and they would frequently meet outside of school playing golf on a Friday afternoon or having a drink at the local club. Boyd shared that his two favourite all-time experiences were an evening they had at the Canterbury or Bankstown League’s Club – the name is a little hazy after all these years – back in 1986, and John’s attendance at Boyd’s wedding reception back in 1988.

John’s advice to current students is a quote by St Jerome “Good, better, best. Never let it rest. ‘Til your good is better and your better is best”.

We wish you luck with your retirement, John.