An art work with deep connections to the past, present and future. 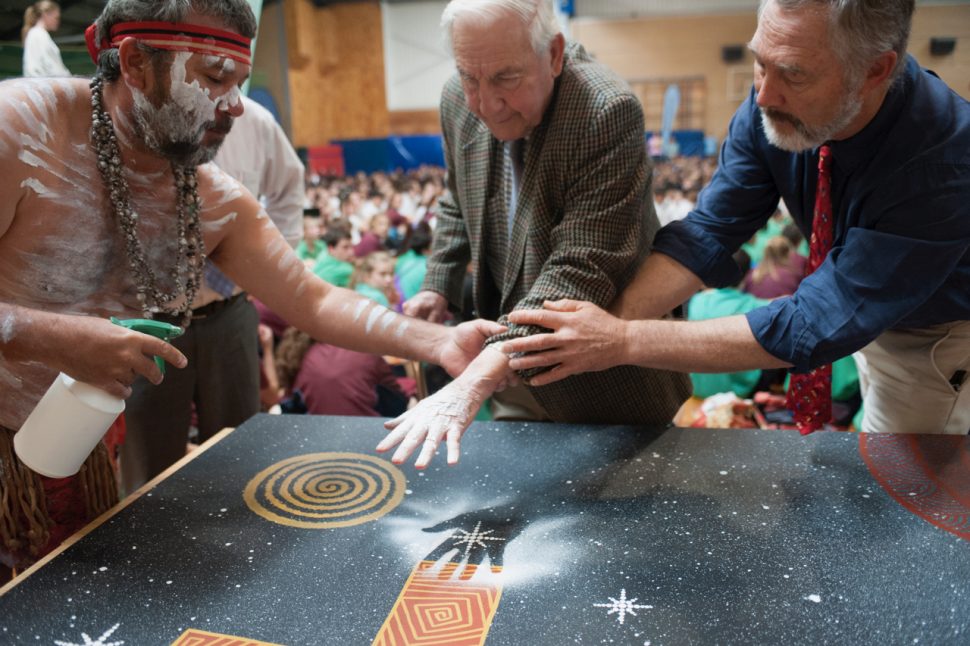 To commemorate the 30th Anniversary of Radford College’s Foundation, Wiradjuri artist, teacher, performer and regular Foundation Day visitor Duncan Smith, was commissioned to create a painting based on Yungbali. Duncan asked of its viewers ‘to listen to the picture with our eyes, so we can connect with, and become part of the songlines of country, of the Yungbali tale and of the College story.’ The story draws down on Radford’s founding dream and its Judeo-Christian heritage. But as Fr Richard Browning added, the work and its narrative needed to be intentionally ‘shaped by the land upon which we find ourselves, Ngunnawal land, its language and culture; acknowledging that story, totem, dance, celebration, ceremony and relationship to earth has been intimately a part of identity and culture for tens of thousands of years.’

Upon finishing the work, Duncan Smith was glowing as he presented the art work to the college: ‘I’m over the moon,’ he exclaimed, playfully pointing to its representation on the canvas. ‘We slowly, slowly, slowly, slowly got there and I am very happy with it.’ One receives the impression that something profound had been attempted and achieved in its creation, which Duncan described as ‘a massive undertaking’. Guided by what he identified as his ‘only balance’, Duncan aspired for this artwork to be ‘as symbolic and as powerful as the story itself that was being told.’

He hinted that different angles of viewing – or ‘listening with your own eyes’ to the painting – will provide the attuned observer with a sense of movement and a gradual unravelling of the messages it contains. ‘You’ve got the songlines of water and of land – of mountains and the hills, valleys and the plains – which is what we call “Country.” And Country is everything…” He pointed to the canvas and stated, ‘It’s got my mob’s story of country in there.’

The work contains many powerful images and symbols. On first glance, the viewer/listener will make out The Cross depicted as a Scar Tree; the sun, moon and earth represented in yellow, white and red spirals; a wedge-tailed eagle as the wind from the Yungbali story, raising a cloud of red dust ‘whirly birds’ with the beating of her wings; representatives of all living creatures: man (as a hunter, with a boomerang), a pregnant woman (with a coolamon symbolising birth), kangaroo (land animals), emu (birds), platypus (water creatures) and dragonfly (insects); and the yellow earth (with corroboree/gathering place symbols). 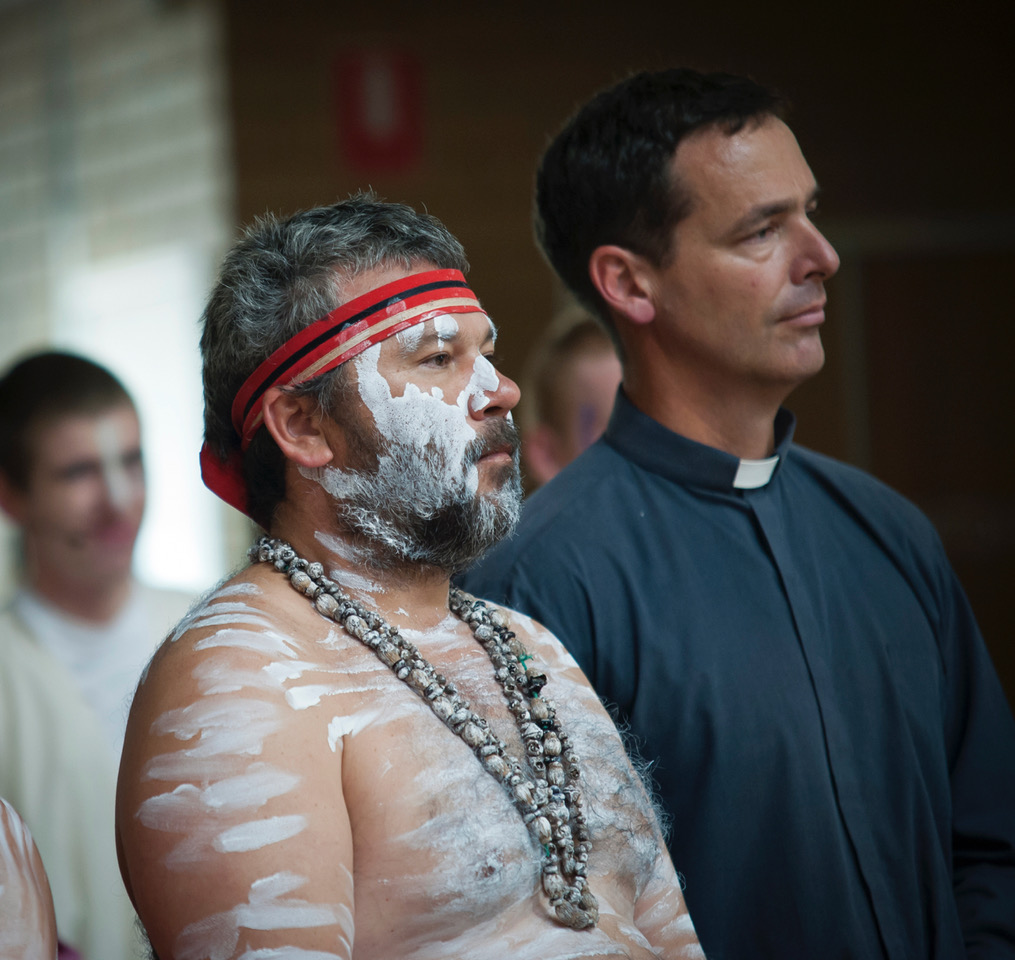 The symbols will no doubt evoke differing responses in each viewer/listener. But celebrating such difference, Duncan was quick to acknowledge that ‘everything creates its own song’. So perhaps there exists within this artwork, created for a community celebrating its foundation, a place where all of its members can somehow weave a part of themselves into the very fabric of the work? Consequently, the collection and fusion of stories/songs from the entire Radford community would seem equally essential to it. ‘Those people who will take part in having put their hands on here will become deep within the story,” revealed Duncan. (And in many ways, my new book is a similar and modest attempt to collect stories that have grown from, are representative of, and deeply celebrate the founding of the college.) 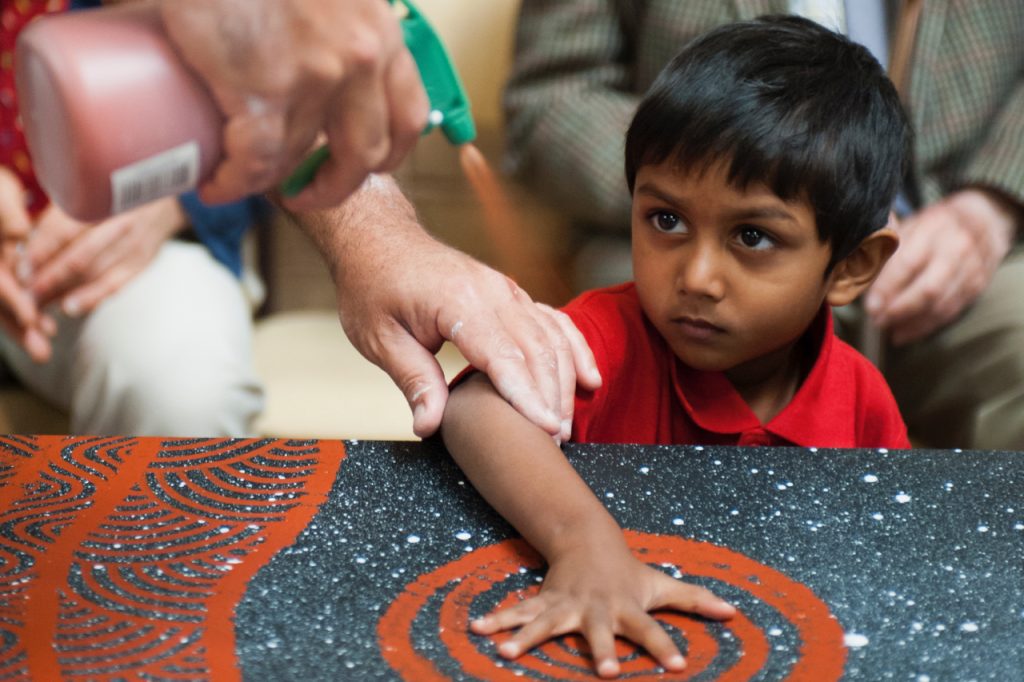 On Foundation Day 2013, selected and varied members of the Radford community with deep connections to its past and present – and possibly its future – had their handprints set deeply into the story/song of the stunning artwork which was to be titled Dirrum Dirrum and the Scar Tree. Duncan hoped this diverse range of people would help ‘connect the community to the songline of the art work.’ Participants included: 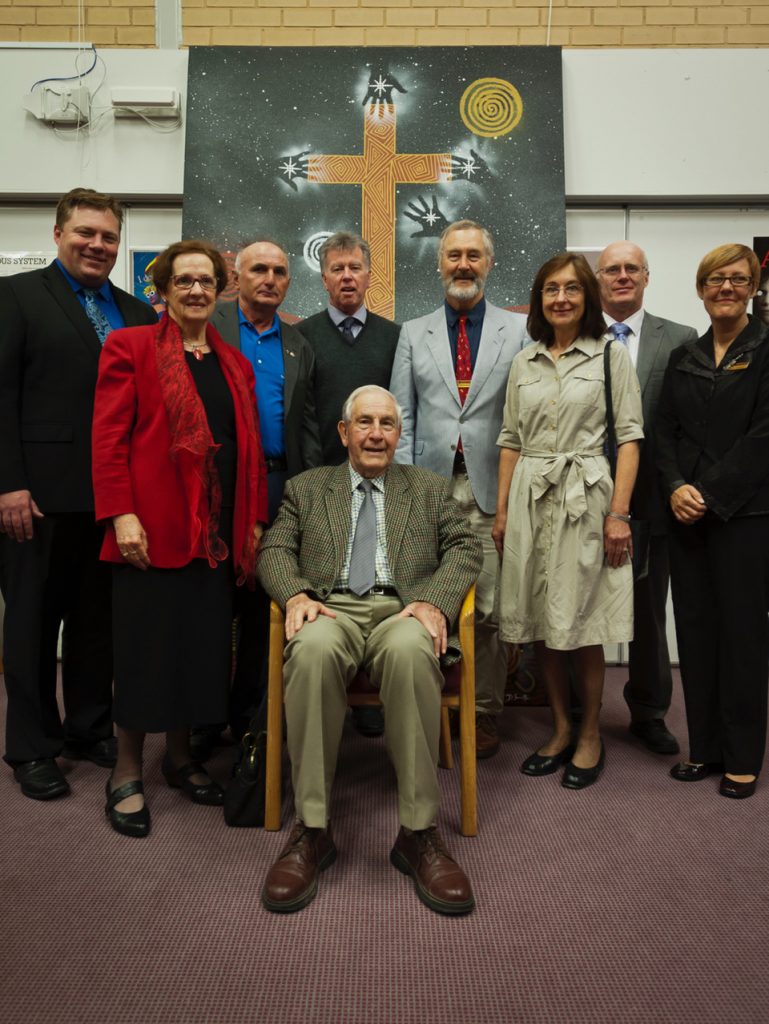 Aminda Weerasooriya, now in Year 4, conceded: ‘When I see the painting in Chapel it brings back memories.’ He remembered being taken in by the size, purpose and mystery of the piece. ‘I thought the painting was so big and I wondered what they were making and what they would do with it.’ He recalled some trepidation amidst the formalities: ‘I was only 3 and a half when I went to my first Foundation Day. I feel really honoured that I was one of the only children from the (Junior) school who got put their hand on the painting. I was also a bit scared when I was with the other people who were there. I wondered why I was the only small child.’ Yet when his name was called to present his hand, Aminda felt an almost unspoken sense of belonging: ‘When I heard my name called, I didn’t know I was being part of a painting… But as soon as I put my hand on the painting I felt like I was already a part of the Radford community.’ (NB. Duncan Smith explained that ‘even the way we feel without speaking a word has its own songline’.)

Ben Garrett, who is now in Year 10, presented his own hand as an act of connection with both the Radford community and his family. He wished to particularly honour the work of his grandfather Graeme Wigg while ‘representing what I am here for and who I am.’ He reflected that seeing the artwork in the chapel reminds him of his grandfather but also of the knowledge that he is an equally important part of the art work and the college’s fabric. I asked him if he felt his family’s Radford ties might continue in future years. Inspired by recent service learning at Black Mountain School he replied, ‘I am thinking about education and teaching. I like it a lot (at BMS). It’s not just service anymore. It’s about the connection.’

The staff involved in ‘showing their hands’ similarly received a sense of something larger occurring. Branko Zec reflected: ‘My job is more than just facilities and cleaning. I was very honoured when the Year 11 and 12 students were asked to pick someone from the Facilities staff and they picked me. Money cannot buy that. I was very emotional.’ Being religious, Branko beams with pride that his handprint is ‘now sitting in the chapel’, has been seen by his granddaughter (who commenced in the ELC last year) and will be viewed by a grandson starting next year. From the artwork Branko receives a familial sense that ‘No one’s on their own – there’s always someone looking out for you. I do have a lovely family, but to me this is my second family. That is why I decided to stay here.’

Brenda Lander remembered having to ‘to pinch myself to check that this actually happened’ when a few transcending moments seemed to collide at the 30th Anniversary. Firstly, there was ‘a very special chance meeting with Mr Jock Mackinnon, the very person who was responsible for employing me way back in 1986, as he stood alone outside the Gymnasium that morning. Then the exhilarating experience of leading our Junior School in the creation of the storm during “The Telling” (of the Yungbali story). And then to top it all off, having my hand printed on the Scar Tree painting. What an incredible honour it was to be part of this.’

Former long-term staff member Peter Dodd (1985-2014) summarised: ‘In the years from foundation to the dedication and completion of this painting, Radford grew into something very special. Through ups and downs, pure joy and heartbreak, young and old, the College developed its unique flavour. Being a part of this event brought all of this into focus. From our first principal to our youngest student, all had a part to play. There were representatives from all these emotions and groups. All had something to offer. I was blown away to have my part in that journey recognised. I hope to be a touchstone, a handprint, for all the groups I had been a part of: teacher, executive, parent, friend … Four years on and many wonderful teaching moments since, my footprints should just about have disappeared. It is great to know I still have a handprint.’

In October 2018, the artwork underwent some restorative work by Radford parent, Kathryn Ferguson who appreciated the opportunity to work on the painting ‘which has cultural significance as a reconciliation canvas. As a paintings conservator I feel fortunate to work on a broad range of paintings which are both traditional and contemporary. The Duncan Smith painting combines both of these qualities.’ I asked her about the specifics of her restoration and Kathryn replied: ‘My treatment of the Dirrum Dirrum painting involved repairing and stabilising a small damaged area, then infilling and inpainting the associated paint losses. The final part of the treatment was to ensure further deterioration was minimised with appropriate protective backing materials and hanging devices.’ 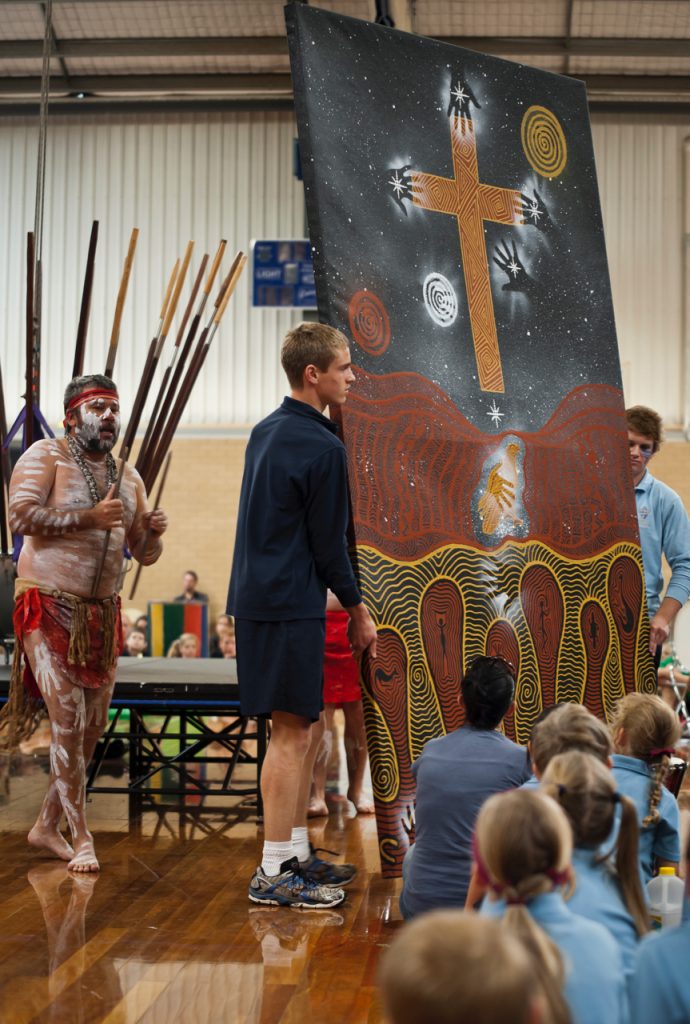 Kathryn reminded us that ‘the display location in the Chapel ensures that the school community can view and reflect on the art including the Scar Tree painting, allowing for interpretation of the spiritual intent of the artist while also encouraging respect for their cultural background. It is important art in the Chapel and throughout the school is accessible to young people to enable them to develop an appreciation of history and culture.’

‘The story is told verbally. But we’ve taken a story and made people listen to it through their eyes…” reminded Duncan Smith. ‘Everything went into place not because I put it there, but because I believe our ancestors played a part; your creator played a part… My ancestors guided me and allowed me to achieve it, because that’s our songline. We know they’re there. We feel their warmth.’

Could I encourage readers, particularly younger ones, to consider giving Dirrum Dirrum and The Scar Tree a respectful viewing and/or a listening? Duncan is not alone in hoping that such open and warm engagement might make students ‘more passionate about Indigenous things happening in the school.’ And possibly interested in learning more about ancestors and founders of the distant past – as well as from not all that long ago.

As Duncan Smith concluded with an equal amount of presence and warmth: ‘They can start from that point to create their own songline – in the action they then take.’