The Radford community can be at its best when it is asked to roll up its sleeves in times of adversity; when it is emphatically asked to put aside those pressing and seemingly imperative daily needs; or when it is jolted from our often myopic routines, screens and sundry distractions, and asked to be human once again alongside the vulnerability of others. 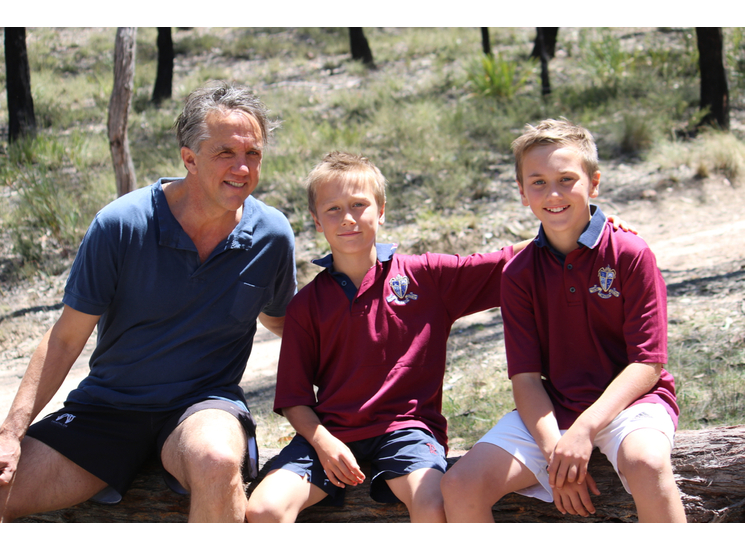 It is a tricky ask setting out to write an article about a person you know will possibly dismiss it with self-deprecating humour, but Mark Whithear’s story needs to be told. He is a contributor is every sense of the word: to his work, his many commercial businesses, his charitable concerns, his various sporting interests, the College and wider community, and most importantly his family. Mark’s association with Radford College has been a long one. He has seen five sons (Jesse, Sam, Will, Hamish and Joe) attend the school at various times, with Hamish and Joe currently in the Junior School in Years 5 and 4 respectively.

Mark was a former player in the National Soccer League (NSL) so it is not surprising that his face is a familiar one on the school ovals. For the past 15 years he has been a regular, reliable, popular and somewhat idiosyncratic football coach. He is always present before training and fixtures a half-hour early, probably because he cannot contain his own excitement for what is to come. This is a coach who has incorporated trampolining, Dad jokes (‘I have a new racing snail which I took the shell off, but that just made it more sluggish’) and World Cup Revenge activities (after that Socceroos quarter-final loss to Italy in 2006) into more traditional football coaching methods. He swears that ‘parents are drawn to trainings and games because the kids are having such a good time. I’m not just teaching kids to kick a ball, I’m teaching them life skills.’ One of those skills may well be gratitude. His past players are certainly also drawn to him, with some collegians making an appearance to express thanks at his 50th birthday dressed as Power Rangers.

Mark believes that ‘Philanthropy should be anonymous and not done any other way’, but upon researching his charitable interests it would be wrong to not list some of them if not to highlight to our students that being a person who runs a family, a multitude of businesses and even international triathlons, need not be so busy that he cannot find the time to support others. Mark has been a major sponsor and Board member of Menslink since 2003, an organisation to which he offers ‘governance skills, an understanding of financial risk; a strong business network; management acumen; strategic planning advice’ and of course, his infamous sense of humour.

His Menslink profile also reveals other ‘NFP community board experience including Kulturebreak (2012-2015) and as a founding board position with Surfers Against Suicide (current). Notably, in 2012 he co-founded Surfers Against Suicide culminating in their first event where over 40,000 people attended the surf pro-am at Manly Beach.’ While an owner of the 39 Steps Café in O’Connor – where a band called Safia had one of its first performances – Mark oversaw the adoption of the ‘Suspended Coffee’ initiative, where his non-judgmental staff dispense pre-purchased coffees for people experiencing hardships. In an online article he reflected, ‘It’s encouraging to see the willingness of the local community to support others who may be experiencing hardship. It is a really nice feeling to be able to provide a hot drink for someone on a cold day.’ (Her Canberra, June 2013.)

But what happens when it is you who is experiencing hardship and are in need of support? It was over a coffee – which Mark bought for me – that I asked about that moment in late February when his life, and his family’s, were profoundly rocked by a freak accident. While cycling with a group of friends on the Criterium Circuit in Stromlo Forest Park, Mark collided with a kangaroo. ‘I had six back fractures and 2 skull fractures. I got to the hospital where they said if I was fifteen minutes later I would have been dead. I then spent three weeks in a coma. Statisticians indicated my chances were less than one in 1000 that I would come out of it. And what really hurts was the impact on my wife. Because for that three weeks I was in the coma she had to do 22 hours a day.’ 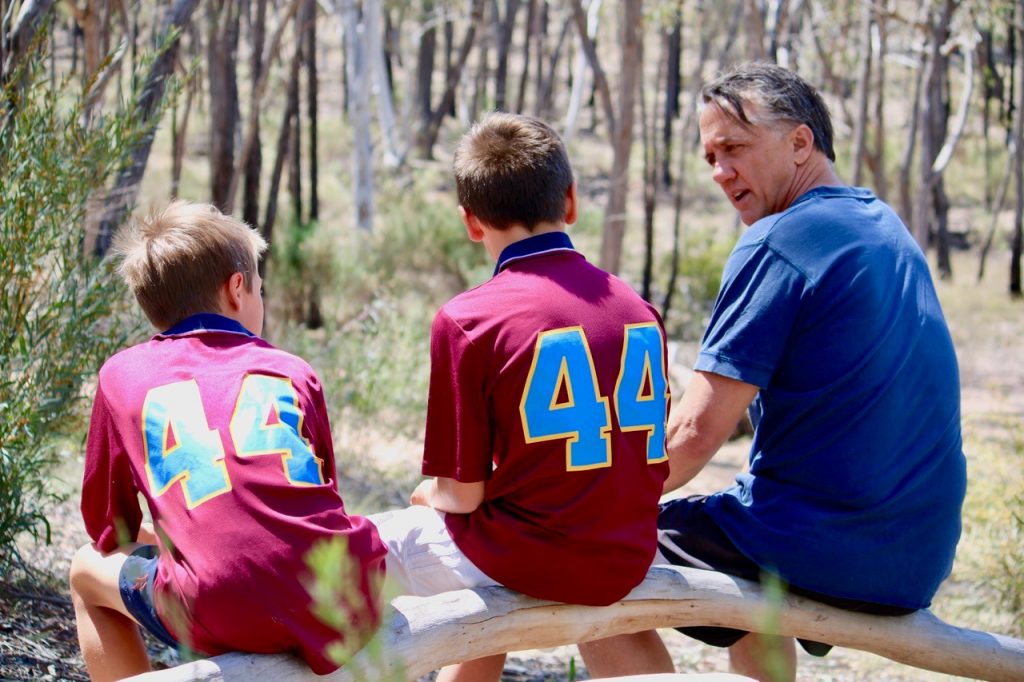 Mark becomes understandably emotional when he reconstructs the time after his accident, when wife Jo was looking after their boys with the aid of Mark’s brother and sister, unsure if Mark would ever emerge from the coma. He speaks glowingly about the support received from the Radford community, and beyond: ‘The way the community lifted. There were meals dropped at our house. Radford Soccer dropped stuff around. There were people ringing, texting, coming around, helping with the kids. I didn’t expect any of it. But when I was in the Brain Recovery Unit in Liverpool, I thought “Oh my God’. People are busy. They are time poor. They do not have spare money. People are cooking meals, buying meals, driving around. So many people helping in so many ways. It literally put wind in my sails.’

With an average stay at the Brain Injury Recovery Clinic being four months, it was a positive sign when this irrepressible Power Ranger checked out after just two-and-a half weeks. But Mark could see in the eyes of his boys that they were perhaps thinking ‘that man who is made of steel … is rusty around the edges.’ He would inevitably have to let time do its healing, despite an inability to sit still, but that did not stop of him from resuming his coaching duties with future Power Rangers on the Radford fields.

Mark recounts a speech he delivers for Menslink entitled ‘The Unlikely Mentor’. It is based on the power mentoring can have ‘when it comes from somebody with no obligation to do so.’ He recalls while recovering in Liverpool, a speech pathologist asked him to write down something to check that he was ‘cognitively OK’. He found himself writing this speech down for her, then stopping three-quarters of the way through. When the pathologist asked why he had stopped he replied, ‘I’ve been giving this speech on half a dozen occasions over the last two years and I just realised the two blokes I’m talking about don’t know that I’m talking about them! When I get back to Canberra I’m going to tell them.’ This is what he did. And he was deeply moved when one of those supporters during his tempestuous teens reacted by crying and responding to him: ‘I had no idea, Mark. That’s fantastic.’

‘I don’t know what my message is for your article,’ Mark concludes. ‘It’s clear to me that I’ve been left of this earth to do something. And I think in the next six months I’ll work out exactly what it is.’ This length of time is possibly an eternity for a man like Mark Whithear. I sensed throughout our interview that, for now, Mark was wanting to similarly share his story – and possibly some unspoken gratitude – with the Radford community. Perhaps he was struggling to find the perfect words to thank those who felt obliged in that challenging month after the accident – when things could have gone either way – to help Jo and his family get through it all?

In writing these articles in preparation for the approaching book, this writer has come to discover that the Radford community can be at its best when it is asked to roll up its sleeves in times of adversity; when it is emphatically asked to put aside those pressing and seemingly imperative daily needs; or when it is jolted from our often myopic routines, screens and sundry distractions, and asked to be human once again alongside the vulnerability of others. It is what former principal David Mulford describes as ‘The pastoral arm that would wrap around anyone who was struggling.’ Or as former student Jordan Prosser (Class of 2006) once intuited: ‘I think there’s something important about the way, during my time there at least, that Radford dealt with crises and misfortune, as a community. I remember during tragedy the way the school rallied – but never in the saccharine or forced way that communities so often come together at times like this. There was always a place for genuine grief, and every arm of the school (administrative, executive, pastoral, religious), seemed completely united in their supporting of the students.’

As Mark Whithear reveals as we finished our coffees, ‘If you train your brain right, you can end up with it better than it was before – which for me is a low benchmark.’ We laugh, shake hands, hug and I assure him that next time the coffee will be on me.

‘I actually think that I’m going to be a better human being,’ he reassured me, in case I had any doubts about his place as leader of The Power Rangers. It’s funny, because right at that moment, I felt all the better myself for the past hour of laughter, tears, conversation, inspiration and unstoppable humanity.