I'm currently very happily married (2.5 years) with a dog named Taco and living in Canberra. I still pursue a previous dream of mine of being a filmmaker by producing amateur short films in my spare time with friends. I also love my sport, especially rugby union, NFL and NBA.

I'm actually incredibly passionate about my work. I love what I do and enjoy diving into the projects and operations I have the opportunity to be a part of.Passionate about my sport. Love my Green Bay Packers and my ACT Brumbies.This might sound silly but I also really love the simple things, spending time with my wife and my dog, watching our favourite show or going for walks around the lake or up Mount Ainslie, or catching up with friends.

When I was in Year 8 I decided I was going to be one of two things. A forensic scientist or an actor and writer in the film industry. I'm lucky enough to have not only earn a living as one of those but also have the freedom (while not exactly the success) of doing the other one in my spare time.Other life goals previous to this though included palaeontologist (thanks Jurassic Park), pilot and bus driver.

Our Year 12 Revue. Has to be one of single most memorable experiences of my life in both developing and performing it. I still firmly believe it was the most successful Revue in Radford's history and what's great now in this pseudo-nostalgic era we're living in is that many of the things we used to help develop the show are now popular again (e.g. Queer Eye) which only reminds of all the great times we had.
I also very much enjoyed my experience participating in the school plays while I was at Radford, One Flew Over the Cuckoo's Nest and To Kill a Mockingbird.

I look back fondly on all of the teacher's I had throughout Year 11 and 12 such as Mr Huitker, Mr Crossing, Ms Van Strien and Mr Streeton, all of whom were incredible role models to me not only with their work ethic and enthusiasm every day but also with their dedication to educating kids and ensuring they were all given the opportunities to do whatever they wanted.

While in school, with the world in the palm of my hand, it was very easy to decide what I wanted to do. In fact, the hardest decision I felt I had to make was whether I would ultimately be a forensic scientist or a filmmaker.
After school, and especially after university, those decisions became a lot harder as it became clear to me that getting any jobs, let alone the specific ones I wanted was going to be far more difficult then that. There were a lot of moments of self-reflection and consideration as I thought about other options for myself. At one point, while back living at home after uni and being unemployed I even found myself googling how to become a private investigator.
In the end I obviously was able to find my feet but the pathways I had to take were far different to what I initially thought and the decisions were not as easy as I thought they would be when I was back in high school.

Not initially. After uni I spent a few years wondering if I was doing what I really wanted to be doing and whether I would actually ever get where I wanted too. In fact, right up until a few weeks before I got the call saying I had been accepted into my current role I was considering some drastic changes, possibly moving across the country, or even out of it to find the direction I felt I needed not just professionally but personally as well.

I wish I'd known how important life experience was to my future. As great as having a good education (whatever that might be) might be, in some cases it can mean nothing if you don't have the right life experience to go with it. Travelling, succeeding, failing, going broke, falling in and out of love, all of these things make us who we are and inform us what we want to be and I think had I known that back then I might've spent a bit more time taking in the experience of it all and less time worrying about what was supposed to happen next.

If you know what you want in life and where you want to go that's great. Work hard, be dedicated and passionate and I guarantee you will achieve it.
But if you don't know, if you're confused or lost and worried you're running out of time, take a breath, look around you, at your family, at your friends, and know that it's okay not to know. You don't have to decide now. I've seen people find their dream job at all sorts of ages including straight out of school or approaching their 40s. It doesn't change the person they are or how the world looks at them.
Do what makes you happy. Enjoy what you have. Know that you will find the path that's right for you. 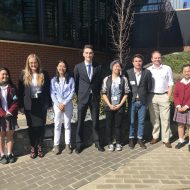