Between them, Boyd Gibson, George Huitker and Richard Wardman have spent 98 years working at Radford. 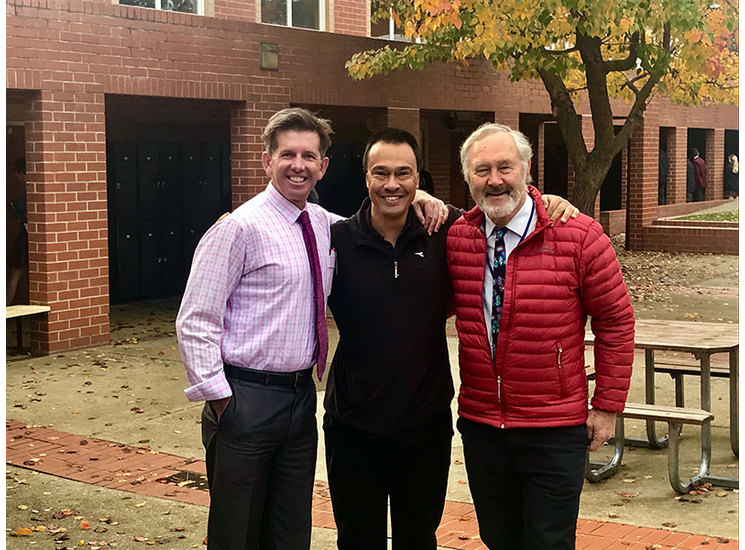 I had better address the elephant in the room: I am not the longest-serving teacher at Radford College. That distinction rests with two formidable elephants (in terms of memory, of course), Boyd Gibson and Richard Wardman. When they joined me last week for an interview for the school history, we collectively had 98 years of Radford experience.

It was a joy to see and hear that time had in no way jaded these two long-serving classroom teachers, who

started way back in 1985 when, according to Mr Wardman, you could ‘throw a blanket over the whole school’. There would have been ample opportunity to attempt this, as a school assembly was held each and every morning in the main quadrangle, with students lugging chairs out from their tutor room, rain, hail or shine.

‘I remember teachers passing out!’ reveals Mr Gibson. Yet battling the elements never seemed to squash Mr Gibson’s infectious enthusiasm; as he recounts, ‘I said to Graeme Wigg (then Deputy Principal) in the early days that if I leave Radford, I’ll leave teaching. I love it here. I want to retire here’.

While retirement may be closer to Mr Wardman’s mind this year, it is inspiring to hear that his passion for teaching science has similarly not diminished one iota: ‘Occasionally people imply if you haven’t left the school after ten years there’s something wrong with you. But I concur with Boyd; if you are in a place that matches your values exactly and you come to school fresh, full of ideas and you’re making a difference that improves the lives of students, then “serve them all my days” it is!’

Richard Wardman came to Radford after working at Cranbrook in Sydney for seven years. He found Radford had similar values to his old school and admired Jock Mackinnon (Radford’s first principal) who insisted that ‘everyone should greet or acknowledge people you meet on campus’. He was also a great fan of Deputy Principal Graeme Wigg, who he describes as ‘the finest educator that I have worked with. Organised, visionary, humble, inspiring, and encouraging’. Richard points out that ‘The Big 5’, including foundation administrator Geoff Cowap, Director of Studies Molly Brownbill and inaugural Chairman Dr Tom Millar, set the tone for the future school in an indelible, lasting manner. This inspiring quintet worked together with considerable drive ‘to ensure that Radford was a good, generous and thoughtful member of the local Belconnen community and the wider community of Canberra’ in educational, social and co-curricular spheres.

Outside of his beloved science classroom, some of Mr Wardman’s school highlights of the past 34 years include ‘the encouragement of activities where both boys and girls can participate together and achieve’. The school’s first musical, Oklahoma, in 1986 (see H For History #6) displayed ‘the positive force a musical could be’ and ‘created an expectation about what Radford was about’ in its palpable community-building, as well as being a platform for the school’s talented performers. He champions the Music Program (‘because it mixes kids up by gender and age group’) as well as the lighting and sound operators in the Technical Group, praising its growth over the years as a major force in ‘the creative enterprise’ and noting that ‘quite a few members have gone on subsequently to maintain a connection with theatre, drama and music’.

In 1986, it was Richard who was instrumental in starting up the now-legendary relationship with Outward Bound and creating (insert the start of Beethoven’s 5th here) Year 9 Camp, convincing Jock Mackinnon that ‘10 days were needed to make it work’ (pictured on camp in 1986, left). Certainly in all of my recent interviews with collegians from the first two decades of the school, Year 9 Camp is nearly always mentioned as a significant and often crucial part of their Radford experience in those formative teenage years.

Boyd Gibson seems more comfortable in praising the characters of others on the Radford staff than himself. His personal highlights revolve around stories about his Radford colleagues – the ‘great and interesting’ teachers, ancillary and ground staff – whom he warmly describes as ‘good quality, down-to-earth, nice, solid people’. Ever the team-player, Mr Gibson has never lost the buzz of working with the SOSE faculty and in fact is even effusive about faculty meetings after more than three decades of sitting in them. He also fondly remembers the ‘high vis’ P&F of the early years ‘when the stakes were a whole lot bigger’ due to the controversies surrounding the establishment of the college. He recalls Principal Jock Mackinnon having to pick up students from country areas who were being dropped off by bus drivers near the Lyneham tennis courts at the end of Ginninderra Drive ‘because the school was being black-banned by the teachers’ union’. With Jock and foundation staff members firmly in mind, he attests, ‘We had staff who really really believed in the place’.

When I asked Mr Gibson why he has stayed so long at the college, he explains, ‘I just love coming to work every day. I’ve

always dodged and weaved aspects of the politics and going for promotional positions … because I loved going in and interacting with the kids in the classroom context. The way I see it, values are a little under strain with all the modern social media … but walking in the classroom today I still feel those traditional values are similar to how they were in the ‘80s’. At this point Mr Wardman chimes in: ‘I love transmitting powerful ideas and lighting that fire under students. There is a love of learning here that is celebrated and is contagious’.

Not surprisingly, both men are fans of RF Delderfield’s 1972 classic, To Serve Them All My Days. In both of these mighty teachers’ careers, the title of that book perfectly and succinctly describes what it is they have selflessly strived to achieve while at Radford College these past 34 years. And the school, its students and its wider community – perhaps now a little too large to throw a blanket over – are all the richer for their unwavering, unreservedly loyal and resolute service. 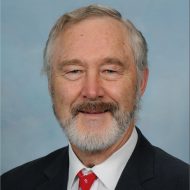