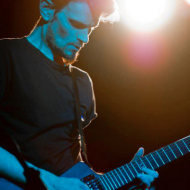 Life looks better than it has since my daughter Harley-Quinn came into the world in 2015. I have been married for over 4 years and have gotten back into composing music again.

Originally I wanted to be a successful basketball player, but bad knees changed the outcome of that dream when I was younger. Luckily I found music at the same time and devoted the next twenty years crafting my musicianship. I am glad to say I am still doing music after all these years.

Mr. Huitker was my role model while I attended Radford for the two years I was there. He took me under his wing for certain elements of the arts and we bonded over our mutual love of KISS. He looked out for me when I needed it during those years.

Quite easy actually. Got a guitar for my 14th birthday in year 8 and it was that light bulb moment. Everything made sense.

Yes and no. Yes because I studied music at CIT, for which I graduated with a Diploma of Music Performance. I have also been performing for 17 years now. No because I have found myself by accident also crafting a passion and understanding the world of IT for multiple companies and experiences. I still work in IT today, which helps fund my music.

Nothing. As hard as high school was, it helped craft me into the person I am today and I wouldn't change that for anything.

School is hard, especially high school, but don't ever let it get to you and just follow the path goals that you have set for yourself. Don't be influenced easily by people who just want to benefit themselves and will take you away from your goal. Also this part of your schooling is temporary, so anything that gets you down while you are there is only fleeting.

In the words of Eric Cartman "Follow your dreams, you can reach your goals, I'm living proof... BEEFCAKE"