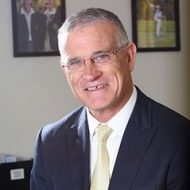 Life in Melbourne is great! I grew up in Canberra, my two boys were born in Canberra. Susan was born in Queanbeyan. We are Canberra people. Yet both my principal roles have been elsewhere, in Perth and Melbourne. I have been Principal of The Knox School since 2014 and I have the best job in the world; rewarding, fun and challenging. The Knox School is only two years older than Radford and shares many similar attributes, being a second generation independent school. Yet it is also quite different, reflecting its own unique history and context, values and culture.

One of my most endearing memories was the first whole school x country carnival in 2013. The carnival in 2012 was awful. The changes, designed and driven by teaching staff saw a huge shift from an afternoon that was OK for the elite runners in the school and a very ordinary afternoon for everyone else, to a whole school event. Music and entertainment was provided by students, as were food stalls and BBQs. Every student in the school was involved, from tiny little people through to the young adults, with the highlight seeing the 18 year olds helping the 5 year olds run around their short course. The look of simple joy on the faces of both groups will live long in my memory.

Who or what left the greatest impression on you during your time at Radford?
While I was privileged to learn from some significant figures; people at the ‘top of their game’, RC also has the propensity and the capacity to provide a ‘home’ to some very quirky people; people that would not be able to function comfortably in many other places, be they students or adults. That sense of inclusiveness and acceptance I saw as a strength of the school. People could be themselves.

I am most grateful to have been able to make a small contribution to the development of the school as a parent, Board committee member and as a staff member. In those differing experiences I was able to meet, mix with and learn from a diverse range of people, a few of whom are significant figures in their own fields of endeavour. I am thinking of teachers, principals, chaplains, senior adult leaders in the school and some of the best student leaders I have come across in my four decades in schools. I am also thinking of the learning I saw adolescent boys ‘sponge’ from their mentors in learning from students with very different intellectual and physical capacities. It was a privilege to be able to learn from these people!

Canberra is unique in Australia. RC should then also be unique and it is! In my career I have worked in five schools in Canberra and four in other states. RC is strongly egalitarian, reflecting Canberra to some extent. Respect is earned as a person. It is not just given because of the role a person plays.
I have seen very senior people in the school and its community, including principals of the school ‘mucking in’ to stack chairs, sweep floors and clean up at the end of an evening function. I have seen young students and students from other schools being assisted by senior students in caring but also empowering ways. Position and influence comes with great responsibility. That balance was often exhibited well at RC.