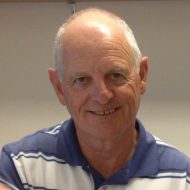 Happily retired after two excellent careers - one for 25 years in the Army and the one at Radford. Very active with the Rotary Club of Hall, currently Vice President, and the Legacy Club of Canberra, as Chair of the Legacy Youth Committee. Golf, bike riding and travel also keep me quite busy.

My wife, Lolita, of 12 years, have 5 children between us and eight grandchildren all of whom are in Canberra - happy families!

I was taken by the way senior students were so interested and caring of the younger ones - Senior School students would be seen to "visit" the kids in Year 7 (I'm talking 1993 ish) to encourage them and look after them.

The staff were considered to be one staff. Teaching staff and Support staff mixed together and worked together (in my experience this was not the case in most other independent schools).

We were a friendly group through all levels of the College- we had "Wiggy", "Laysho", "Doddy", "Wriggles", "Crash" and of course "H". However everyone remained respectful and considerate.

In my 15 years at the College we never stopped developing and this has obviously continued since I left in 2007. I calculated that we constructed $28m of buildings in my time. But it wasn't only the capital works; I recall a parent saying to me on one occasion: "it's great to see all the improvements at the College - we can see where our money goes, not only physically, but in developing our children".

Radford College had the most incredible leadership. The Board Chairs and Principals, Tom Millar/Jock Mackinnon, Lawrie Willett/Gramee Wigg, Ray Young/David Mulford, Ian Morison/Phillip Heath & Fiona Godfrey ... These people have steered the College to what it is today. As far as I know no other school has the waiting lists like Radford does.

There was another man that many have forgotten - he negotiated the lease on the land. He set up the administration. He oversaw the early construction. He cultivated the support staff and he was forever calm and considerate. He managed the College financial affairs with "pencil and graph paper" and turned it into a healthy business. This was the late, John Geoffrey Cowap, the first Administrator/Bursar.

I'm just happy to have been a part of Radford. For me it was a great second career. I am grateful that I was able to be a part of such a successful educational facility.

It's a friendly, productive and successful school that has an amazing reputation, not only in Canberra but throughout the independent school sector.