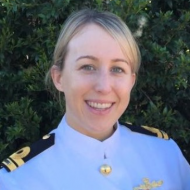 Mentor If you’d like me to be your mentor please contact Collegians to arrange a meeting.
Last updated 25.05.2017

I am a mum to two wonderful children, and work full time as a Naval Officer, primarily doing wether forecast support for the ADF.

I had no idea what I really wanted to do when I left Radford, except that I wanted to be independent and somehow feel like I was making a difference in the world. I did the most logical thing to do at the time, and that was join the Navy, and figure out the rest as I went along l!

It did, but I by no mean had a clear plan when I left school. I completed my undergraduate degree sponsored by the ADF. I majored in math to keep my options open, which was lucky as later in life I decided I wanted to be a meteorologist. Having a strong major, and a good academic record, I was lucky enough to be succonded to the Bureau of Meteorology to undertake a qualification as a world meteorological organisation endorsed weather forecaster. I decided to do a masters of business to round out my education.

that life isn't meant to be easy, and in fact, there is much to be learnt from the hard times.

Keep your options open and remain responsive to opportunities!