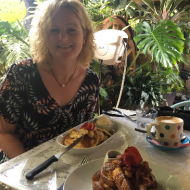 Mentor If you’d like me to be your mentor please contact Collegians to arrange a meeting.
Last updated 29.04.2020

We’ve just left Newcastle, NSW, after two years, and yes sadly left the beach! I’ve just discharged from the Air Force after almost six years as the equivalent of a human resources manager. It was a pretty full on role; I’ve managed small teams of staff, and was relied on to provide a variety of policy advise to my chain of command, I supported personnel through crisis and deployed to the Middle East.

I’m pretty passionate about politics and I’m political active within the scope my career will allow. I love to cook and I’m a bit of a yoga fan. In the last few years I’ve developed a taste for travel to less visited places; I’ve recently returned from a holiday to Central Asia and work sent me to Arizona and Utah last year! I’m currently studying a post-graduate science degree though I’m not really sure what I’ll do with that.

I always wanted to be an engineer! But alas...

I’ve been a political staffer, the equivalent of a civilian human resources manager in the military and now I’m back working as a parliamentary and coordination officer.

It’s not easy! But it doesn’t matter, the greatest thing about going to Radford is that you have a great foundational education. I’m still not sure what I want to do or be but thankfully I have the freedom and opportunity to change, and I’d put that down to my education (plus living in robust democracy).

Nothing ever goes to plan. In year 11 and 12 I chose subjects with the intent of studying engineering at university. First year uni I studied economics and a bit of politics but I ended up graduating with a commerce degree majoring in marketing (and taking an extra 12 months to finish). I’m now studying a post-graduate science degree majoring in biology and I’m not sure where that will take me.

As far a career plan, there is none! At school I wanted to be an engineer, then decided I’d become an economist. I’ve worked as a political staffer for both state and federal politicians, I’ve been an officer in the Air Force and now I’m working as a parliamentary and coordination officer. Since leaving school I’ve lived in Darwin, Sale, Brisbane, Newcastle and now Armidale, and I did a six month deployment to the Middle East! Not having a plan has worked out pretty well for me!

I wish I’d understood how important a good education is. Whilst I think I made the most of my schooling, it’s not until you hit the adult world you truely understand how many opportunities are created from being educated.

Make the most of your education, always chase the challenge and when you get the chance find a way to give back for the opportunities you’ve been given.

I’d also say have opinions and be informed. It doesn’t matter where you sit on the political spectrum but know why you sit there. Be prepared to defend what you believe but also be tolerant of the views of others.

Sharing their Life after Radford with current Year 12 students 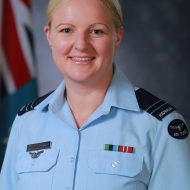 Life after Radford with Jessie Robinson (Class of 2010)