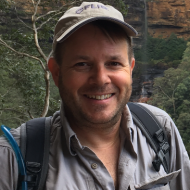 Mentor If you’d like me to be your mentor please contact Collegians to arrange a meeting.
Last updated 26.06.2018

Wrote a bunch of songs, formed several bands and eventually recorded an album in 2009. Not doing much original stuff now but am enjoying playing bass in a Midnight Oil cover band. I've been away a lot so I now enjoy spending time with the kids and my wife. Sailing, shooting, climbing, skiing, cooking and all the normal domestics.

Typically, a pilot. Oh, and I was going to live on a yacht. That's still in the works, however.

I came from Belconnen High in the first Radford Year 8. I fought the system for a while but gradually came round and eventually appreciated all that was on offer. My favourite moment at Radford is Radford. I would not be where I am today without it.

Mrs Murphy taught English and guided me (very patiently) to a love of literature that has informed most of my creative life since. Mr Mackinnon and Wigg forgave my trespasses and were the best of role models. From a brat I became a prefect and so an officer. Actually, all our teachers were inspiring, passionate and caring.

Looking at an old school assignment, I think I created a vision of my life very early on and am still following that path. Very glad I made some good choices back then...

Generally, yes. There's been the odd hiccup, usually self-inflicted that were actually of benefit with distant hindsight.

Service is the path to happiness. Self-involvement, while necessary in certain fields, will not sustain one as age sets in.

If you seek the professions, you just have to do the work. It begins now and will seem endless as you progress through university and subsequent training, gaining a reputation and enough clout to finally feel secure. Then one day you'll sit on your pool deck, next to your chimenea with the neighbor's Labrador at your feet, typing advice for students of your alma mater and marvel at how well it's all gone and how very satisfying the journey.