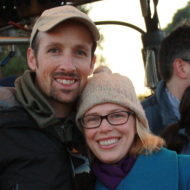 My work life is a mix of office time and field work. As I've progressed through my career, the balance has tipped more strongly towards the computer so I've started to run trails more often to maintain my connection with the natural world. I've worked in environmental conservation both in Australia and in Hawaii since graduating from Radford in 2000 and the ANU in 2006. The pressures on the natural world are now more than ever before in human history and to try and understand the ecological, social and financial drivers of change mean there is never a dull moment in this line of work!

Ruth and I got married in 2015 on a beach in Hawaii while she was completing a masters degree at the University of Hawaii.

I am a passionate fisherman and love spending time on the water. The things I've seen under the guise of fishing never cease to amaze me. Seals, dolphins, whales, sharks, eagles, snakes, platypus, crocodiles and the list goes on and on. Fishing has taken me places I would never have thought to visit otherwise. In the last few years I've written a blog (flick and fly journal) with a couple of mates and was at one time writing the fishing column for the Fairfax newspapers (Canberra times, Narooma, Batemans Bay etc).My other main hobby has been running. I started running 10km fun runs but after a couple of years was looking for more of a challenge. I stepped up to half marathons and think they are the best distance for busy people who don't have huge amounts of time to train. I have done one road marathon in the Barossa which was an experience, but probably not something I will repeat again! My real passion now is running trails, especially single trails. I've been known to run up to 3 or 4 hours through the forest with a water bottle and a couple of snacks!

When I left Radford I wanted to be either a ranger or work in IT. After the first 12 months of a double degree (science + IT), I promptly dropped the IT part of my degree and focused purely on environmental science. I've never looked back. IT was not for me, but I'm glad I gave it a go and found out for sure.

In hindsight John Fraser, my year 10 Geography teacher had a big impact on my life. Mr Fraser was passionate about the natural world and understanding how it worked. I learnt how beaches are formed, why rivers change course a lot in Australia and why Australia's vegetation is so unique across the world. I was intrigued and wanted to know more. Even after 10 years working in environmental conservation and revegetation I am still learning something every day.

After 12 months at university and exposure to two completely different disciplines (IT and environmental science) it was an easy decision. Before that I had no idea. The best piece of advice I got was from my father who told me to study whatever I was most interested in at school. That would have been Geography and IT.

No, but I suspect it rarely does. I was convinced that I was going to work in fire science and fire management. I graduated from my Bachelor's degree shortly after the 2003 bushfires destroyed many houses in Canberra. The government had allocated a lot of research money for honours and PhD students to study fires after this disaster. Unfortunately my potential supervisor had a full cohort of post-graduate students and so I was guided towards my second choice which was sustainable agriculture and farm forestry. Greening Australia gave me a scholarship and I would ultimately end up working for them after I graduated.

Radford is a great school but it represents only a very narrow slice of society. I wish I had known just how narrow that slice was at the time. It wasn't until I left school and started working full time before uni that I came to appreciate just how difficult life was for many people my age, who were balancing bills, work and even children.