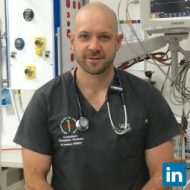 Living in Adelaide since 2 years post Radford. Working as a specialist Emergency Medicine and Retrieval physician - spend half my time in an Emergency Department and the other half working for the South Australian retrieval service either transporting or coordinating the transport of critically unwell patients around the state. Married to a paramedic - we didn't meet on the job as everyone assumes but rather in first year university when we were handcuffed together on a pub crawl- with 2 young children.

One of my favourite moments of my time in Radford was the 1999 Canberra North Boys Softball Grandfinal. This was the first year that Radford had entered a boys team in a softball competition after a group of us in my year successfully petitioned the school to allow us to play this sport after they vetoed us playing baseball. There was initial resistance to us playing softball as prior to this only girls had been allowed to play this sport for the school but ultimately the school was persuaded by the equality argument. Our team was an odd collection of players coming from a wide spread of friendship groups in the year level which was one of the features to it that made it so memorable. We got on well together, partly because we were coached by the affable George Huitker who surprised us with his skills in this sport. That season we were in the same competition as a team that was effectively the ACT Under 16s team. They were undefeated in the course of the season, however we did alright as well and so ended up facing them in the grandfinal.
One of the hallmarks of our team was the fact that no-one could pitch, and so we ended up choosing the least-worst pitcher who used to bowl what we called lollypops or "Christmas on a stick".
Through the course of the game we ended up staying surprisingly competitive, and in the final innings we were tied but with us still to finish batting. We were 2 out of 3 people out, and had bases loaded. Our next batsman stepped up to the plate and with him being more noted for his fielding as opposed to his batting skills, we thought the game would likely finish there. However with 2 strikes and no balls down the batter managed to effectively bunt the ball and keep it in play and ran for first base. The pitcher ran in and tried to get the player out on first base but in his haste he overthrew first base and ultimately it ended up being a grand slam home run and we were victorious! After our pioneering start the following year not only did our team continue (and successfully defend our title) but further boys teams emerged from the years below.

Year 9 camp was also a pretty amazing experience and does stand out from my time at Radford.

I fondly recall a number of teachers. Even though he never taught me I always looked up to Mr Leyshon because whilst firm, he was always fair and you felt that any decisions he took were reasoned and well informed including from the students.
I am now inspired by people who are parents of young children who seem able to balance their professional and personal lives as this is something I have struggled to do. I use the word "seem" as sometimes perceptions can be inaccurate.

Fortunately quite easy. After dallying with the idea of opening a mexican fast food franchise or being a veterinarian I settled on wanting to become a doctor at the end of Year 10. After getting into medical school my path was then relatively fixed in terms of several years of university and after graduation having further training, which was made somewhat easier by my being confident in choosing which specialty I wanted to work in relatively early. I feel grateful for not having to think or stress too much about what I am doing although at the same time it did make my life post graduation from Radford a little less scenic.

Fortunately yes. Not perfectly smoothly and there were a few occasions where I thought I might not obtain what I had set out to do, but ultimately I am exactly where I planned to be professionally. These periods of uncertainty were tough for me and those around me and I was grateful for the support I received from others at those times.

Always remember to show gratitude to anyone who assists you or is considerate of your needs. It is always appreciated and remembered and makes the world a better place.

Reframe any negative situation. By this I mean change your perspective on how you view a negative scenario or occurrence by actively looking for any positive that has or can come from it. It won't change the fact that the situation is painful in some way, but will help you deal with it by showing a beneficial side. This can be as simple as viewing a parking ticket as a positive in that the local council that issued the fine will now have more money to look after the local parks, to viewing relationship conflict as a way of you working out what is important to you and what you can compromise on and what you cant.
Stay true to who you are - by finding out who you are. You can only pretend to be different to your true character for so long especially if you are being different purely to please or impress others. That isn't to say you shouldn't try to improve yourself and learn from your mistakes, it is just to be mindful that all people have certain traits that are inherent to the person they are. Spend time working out about what these traits are, and consider what is important to you and what makes you happy.